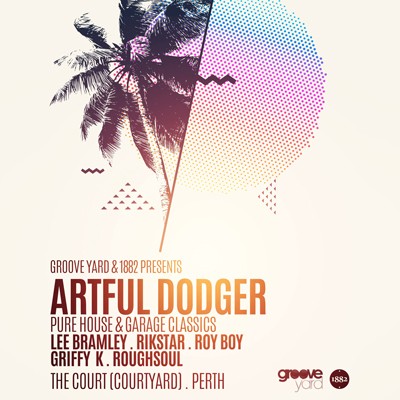 But to get you through it, and in true GROOVE YARD style of always keeping it fresh we have lined up something different for you in SPRING...

WE ARE TALKING PROPER PARTY MUSIC FOR PEEPS THAT KNOW !!!

As per all of our previous events, This WILL be a sell out event so don't delay in getting your tickets.

As usual this is going to be another fantastic event at the amazing Court venue, top production and the best vibes.

ARTFUL DODGER
Originally comprising of producers Mark Hill, Pete Devereux & MC Alistair, the name Artful Dodger was already established as the most commercially successful UK garage act to have emerged from the scene to date .

Together they produced an amazing string of chart topping hits (Movin Too Fast, Re-Rewind ft Craig David, Woman Trouble, Please Don't Turn Me On), remixes & a platinum selling album (It's All About The Stragglers) that confirmed Artful Dodger's place as the most successful Garage act of all time.

After Pete & Mark decided to follow different musical paths MC Alistair continued to bring the chart topping brand to the clubs & festivals around the world linking up with Dave Low co-owner of the Label Public Demand Records, responsible for signing & breaking The Artful Dodger brand.

The partnership was an instant success on the dance floors due to their versatile ability to play for any crowd in front of them. They have been tearing up dance floors as a duo for over 10 years now & their reputation as an MC/ DJ outfit has become highly rated.

Many Artful Dodger tracks can be found on the UK garage compilation album series Pure Garage, mixed by DJ EZ.