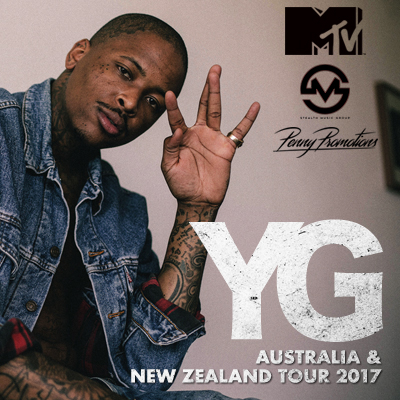 Due to popular demand and venue unavailability’s YG has decided to reschedule his Australia & NZ tour to this June 2017 and has added 2 new dates in Sydney & Melbourne.

We do apologise if this causes any inconvenience for those who have purchased tickets for the original dates however they are still valid for the new dates.

Refund requests can be made by emailing support@megatix.com.au - All requests must be submitted prior to 5pm AWST on Thursday 30 March to be accepted. Any requests issued after this time will not be accepted.

Los Angeles-based rapper YG returns to Australia & New Zealand in April 2017 for his first solo tour. Headlining shows in Melbourne, Perth, Brisbane, Sydney and Auckland. Following the release of his sophomore album Still Brazy early this year, YG has emerged as the preeminent voice in the Urban Music Scene. Garnering a hugely positive reputation as a live performer in the States - it's our turn to get a dose of what he has to offer down under.