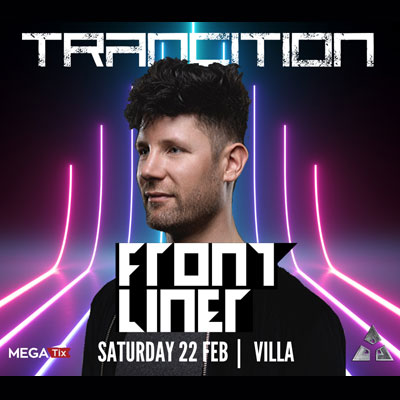 What a year 2019 was!
To kick off this years events, Trancition welcomes back to Perth, the newest addition to the Defqon.1 Legends, Frontliner 'The Melody Man'!

Tickets on sale Tuesday 4 Feb @ 9am

Frontliner, also known as “the Melodyman” started producing at age 11. 10 Years later releasing the first chapter of what was soon to become a journey through his mind. His passion and perseverance made him discover a way to combine sublime melodies and intense basslines harmoniously. Always elevating his musical skills as he goes.

His discography consists of over 100 tracks including legendary Anthems like "Weekend Warriors" and "Symbols" as well as remixes for Armin van Buuren, Hardwell, Showtek and Major Lazer.

After all this success his both legs are still firmly on the ground, investing his spare time to do good whether this is by helping animals with his volunteer projects or aspiring producers by teaching them how to become a better producer. Throughout his career he remained to be one of the guys, always spending time with his fans.

When Frontliner steps behind the decks, his performance blows away crowds all over the world for the most respectable events like Electric Love, EDC, and Tomorrowland.

Recently Frontliner released a sample pack with his lifework of bass drums and effect sounds legendary EDM artists started to use them in their productions, spreading his unique sound all over the world.

While always enjoying the moment his plans for the future are clear; stealing people's hearts through music all over the world.