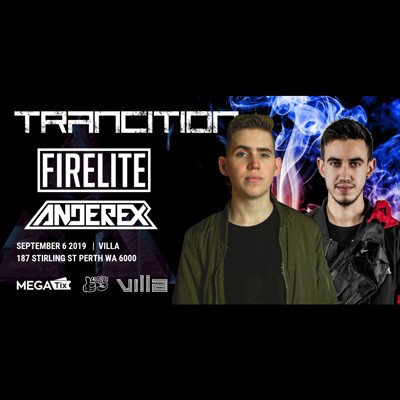 Trancition brings to Villa two of the most up and coming talents Australia has to offer!

Firelite's stock has risen faster than a NASA rocket. It is clear to see he was born with music in his veins starting in the family with his dad, a celebrated musician, and by the age of 12, his own musical journey began with instruments such as piano, guitars and drums. He immersed himself in various styles of music and his passion was on display far before he began producing. To see a young Ben up the front wherever hardstyle was being played that he had access to was always a common and welcome sight. His dedication and passion have paid off being signed to WE R and with support and mentoring from musical idols such as Code Black, Toneshifterz and Audiofreq, his drive hasn't come close to leaving 1st gear becoming one of the fastest rising talents on a global scale. 2018 was a massive year as he took to the mainstage at the awe inspiring Defqon.1 Festival Australia and continued that momentum into 2019 with the youngest ever residency at Masif Saturdays, supporting Darren Styles at his Sydney only show, and headlining Show Your True Colors with Brennan Heart. This young gun has the world at his feet and if he continues along this same trajectory, it's only a matter of time before he deservedly stands alongside those he considers his idols. He is the epitome of hard work and talent combined.

Delving into the arcane world of music production at an early age, inspired heavily by early Hard Trance and Hardstyle influences, Anderex, hailing from Sydney Australia, is known to put his entirety of his energy and creativity into his experimental style of production that has slowly been bred and refined over many years by challenging himself to find his own unrivalled sound.
Now, at the young age of 19, Anderex has promised himself to deliver a consistent brand of innovation through raw, innovative, never heard before sounds to the Hard Dance arena.
Anderex’s sound can be witnessed through his chaotic live sets by fusing elements of the Harder Styles with Raw, Psy-Trance, Drum n Bass and a cross-breed of different genres, embodying Anderex’s signature style. Being the new kid on the block, Anderex has already left his mark within the Hardstyle scene which can be seen through the already huge international attention and support from pioneering artists such as Noisecontrollers, Atmozfears, Code Black, Bass Modulators, Adrenalize and countless others, proving Anderex is one to watch out for.
Now it’s time for Anderex to bring the Anarchy to you.
#BringTheAnarchy