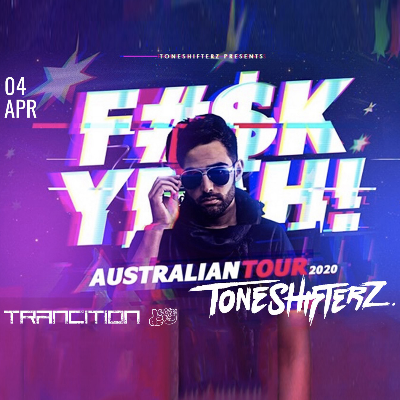 Due to the current circumstances surrounding the Coronavirus on a world scale, all future Trancition events for the foreseeable future will be cancelled including Trancition presents Toneshifterz.

Although we bring you this news with a heavy heart, the risk that running our events poses to the artists who we hold dear and their fans is of utmost importance.

We'd like to take this moment to thank everyone for their support thus far, and don't worry, we will be back before you know it!

MERCHANDISE
Trancition merchandise will be available on the night.
PRE-ORDER & COLLECT - visit perthhardstyle.com for more info

Toneshifterz represents the Australian Hard Dance scene in the forefront of the Hardstyle scene, The Netherlands. Confirming his status on main stages both down under and Europe such as Defqon.1 Festival Australia, IQON, Decibel Outdoor Festival, Hardbass & I Am Hardstyle.

Starting as a duo act in 2009, the success came quickly with hits such as ‘Jaydee’ and ‘Empire of the Sun’. Before long they were signed to the famous Fusion imprint and in 2011 their debut album ‘Till Daybreak Meets’ was released leading Toneshifterz to create the official Australian Defqon.1 Festival Anthem ‘Psychedelic Wasteland’. 2013 marked the switch to Brennan Heart’s new musical platform ‘We R’ with the massive single release ‘Last Night (feat Chris Madin)’ and follow-up ‘Parachutes’.

2013 is the year in which Elie and Olcay decided to split up as a musical duo.

Elie then continued to provide his fan base with heavy Hardstyle hits over the years and in 2016 he collaborated with his fellow Aussie Artists and close friends Code Black and Audiofreq with the Defqon.1 Australia Anthem ‘Dragonblood”.
Toneshifterz decided in the end of 2016 to move to the Netherlands and pursue his dream to the fullest, and released his huge psy influenced hit ‘PSYSTYLE’ which made waves in the EDM world played out by many Artists such as KSHMR, Will Sparks and Timmy Trumpet. At the end of 2017 Toneshifterz released his second Album ‘Shifting To The Source’ in 2017 which includes his huge collaboration with Atmozfears called ’You & Me’ which they debuted together at Defqon.1 Netherlands in 2017, also his dance floor collaboration with Will Sparks “Home 2 U”.

The album also included his collaboration with the Heavy Weight Of The Hardstyle Scene Brennan Heart, with their track ‘Define Yourself’ (Official I Am Hardstyle Anthem 2018) which became a hymn for the Hardstyle scene.

Following his album Toneshifterz then together with Brennan heart did remix for Armin Van Buuren of his latest hit “Blah Blah Blah” which smashed the dance floors of every event and festival, quickly becoming a huge hit!

In 2019 starting with the fresh new label “I AM HARDSTYLE Records” Toneshifterz plans to deliver more fresh releases for the Hardstyle realm in the future.