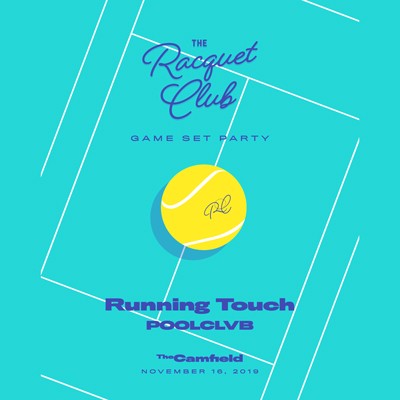 🎾 The Racquet Club 🎾
Feat. Running Touch & POOLCLVB
At The Camfield

The Racquet Club returns for summer with our season opener at Perths favourite venue, The Camfield. With an all star national and local line-up + the return of the Quite Please silent disco, we're set to start the season with a grand slam.

RUNNING TOUCH
Running Touch is the mysterious artist from Melbourne, Australia that has grown from an industry whisper to one of the most esteemed acts to hit the electronic music circuit in recent times.

The Running Touch project is a middle-grounded insertion into a body of alias’, fluently rocking back and forth between experimental electronic, indie-pop and indie-electronic sounds. In just a few short years, Running Touch has earned himself a reputation as not only an exceptional producer – but live performer, songwriter, lyricist, singer, creator and a forward-thinking visionary more than just a musician alone.

POOLCLVB
Beating to it’s own drum of positive vibes & all round legit fun times is POOLCLVB. Defined not by a sound but more so a feeling, POOLCLVB culminates the fruits of chill & house with a distinct future edge; systematically unleashing a bounty of musical delicacies reminiscent of sunset bike rides along Venice Beach. POOLCLVB manages to blend in a forward thinking sound with nostalgic & carefree inspiration from the 90’s, shaking it all up to masterfully deliver a dynamic cocktail of musical delight.