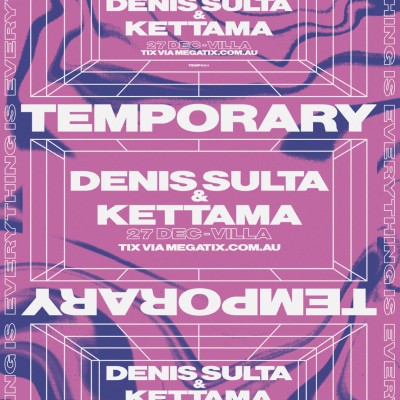 Elevate your perception of music and dance, [everything is] Temporary.

Denis Sulta
It's been nearly impossible to scroll social media over the past year without seeing a video of Denis Sulta absolutely owning a dance floor somewhere in the world as his ability to fuse decade-old dance classics with disco heat and underground techno bangers solidifies his place as one of the most exciting prospects from the ever-fertile Glasgow scene. His second time in OZ after debuting on Australian soil in March, we expect electrifying energy start to finish for this supreme double header event. Listen → https://tinyurl.com/temporarysultamix

KETTAMA
With the world at his feet & a very impressive resume already Kettama is on the path to a long and healthy career in dance music. Almost exactly a year to date since he released his 'Bucklyn Bridge' EP on HOMAGE he's since released on Shall Not Fade, Dance Trax & Madhouse to name a few. It's been a meteoric rise over the past 12 months for the Irish native & we are absolutely looking forward to seeing him in action December 27th. Listen → https://tinyurl.com/temporaryketmix

FB: Temporary
IG: @temporary.perth
We acknowledge the traditional custodians of the land this event is taking place upon, and we pay our respects to their elders of past, present and future.