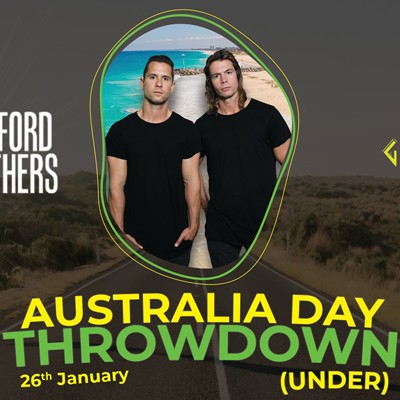 ☁️Supported by local legends Tom Gilmore & Rossync
~~~~~~~~~~~~~~~~~~
Acclaimed DJ and production duo The Stafford Brothers harness and apply endless energy to every aspect of their multi-faceted career, diverting it from the studio and the stage into extensive entrepreneurial pursuits and ancillary businesses. As a result, the brotherly pair of Chris and Matt count multiple platinum certifications, tens of millions of streams, three consecutive ITM Awards as “Number One DJ’s,” an ARIA nomination, and hundreds of sold out shows among their growing list of achievements.

After grinding it out in their native Australia for years, the duo achieved a major international breakthrough by way of the 2013 single “Hello” [feat. Lil Wayne & Christina Milian]. Not only did it go triple-platinum Down Under, but it also vied for “Song of the Year” at the ARIA Music Awards. Between sold out shows in every corner of the globe, they collaborated with Waka Flocka Flame, T.I., Rick Ross, Jay Sean, Steve Aoki, and more. They landed in the coveted DJ Mag Top 100 in addition to the ITM honors. 2019 saw them ramp up their musical output. Sharpening their signature sound to knifepoint precision, they rekindled the fire of their earliest material as fuel for a bold and bright next chapter. The energy simply never relents.

This is an 18+ Event - Valid form of identification is required for entry.