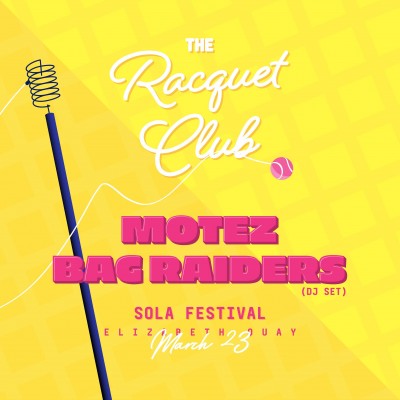 For the final Racquet Club of the season we're heading to Sola Festival as it pops up at Elizabeth Quay in March. This fully themed venue with state of the art production is set to host our biggest party yet!

Motez’ soundscape pushes the boundaries of your regular house producer, going way back before he was making wholesome, wall-to-wall club cuts and rocking festivals stages. His classical piano know how and clear influences of the 90’s allows him to flex his skills and musical-taste across all of his releases, chalking up six Hype Machine #1s, an ARIA Gold single and dropping official remixes for Disclosure, Sam Smith, Goldlink and Ellie Goulding. Motez has also joined Diplo & Friends, Beats-1 Radio and triple j Mix Up to lay down his favorite selections.

Motez’ back catalogue across Sweat It Out, Food Music and Universal/AATW speaks for itself. His streak of infectious dance-driven releases continued on from 2016’s ‘Down Like This’ ft. Tkay Maidza to 2017’s ‘Praise’, which led him to his first ARIA Certified Gold single, ‘The Future’ ft. Antony & Cleopatra. Three years in the making, ‘The Future’ is Motez’ most personal offering to date, receiving support from BBCR1, KCRW, Live105 and triple j, and amassing over 12 millions streams. For Motez’ latest EP, ‘Late Thoughts’, he delves back into the club tipped sonisphere from which he has crafted his reputation with a two-track offering. ‘Visceral’ has received early support from triple j with spins from Richard Kingsmill and The Aston Shuffle, while the tech-house driven ‘Roll Out’ was premiered with Anna Lunoe on Beats-1, followed by spins from Billy Kenny on UK’s Kiss Fresh and BBC Radio 1 figureheads Pete Tong & Danny Howard.

Good things come to those who wait. After years at work on their highly anticipated second album, Bag Raiders (Jack Glass and Chris Stracey) share the lead single “Lightning”, as premiered by triple j Good Nights and out now on Island Records Australia.

“Lightning” is about the bolt of budding affections and attraction that comes after meeting someone new, an emotion brought to life by vocals from Brisbane’s The Kite String Tangle. First conceived (fittingly) during an electrical storm, the track is bursting with the euphoric, dancefloor-ready production they've built their name on, complete with more levels of emotion than ever before, perfectly bridging the sound of Bag Raiders old and new.

With “Lightning” comes news of their second album that has been almost a decade in the making. Horizons, due out later this year on Island Records, documents the journey the production dream team have been on since the release of their ARIA-nominated, self-titled debut in 2010. From club stardom to world tours and festival slots, the pair have built a reputation for mammoth dance releases that keep the world moving with them. Outside of their multi-platinum, global hit "Shooting Stars", they've also released the widely-loved “Way Back Home” & gold-certified “Sunlight”, a string of EPs as well as remixes for the likes of Riton, Totally Enormous Extinct Dinosaurs, Crooked Colours and Banks.