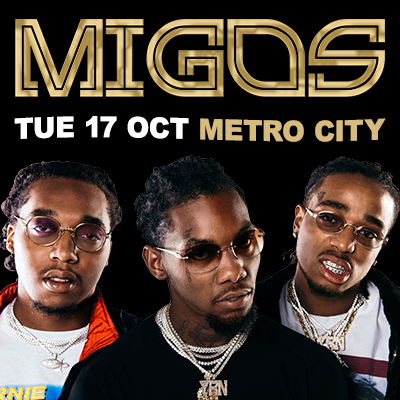 The Atlanta trio will join us off the back of an extraordinary year-long winning streak that shows no signs of slowing down. In January, Migos released their Billboard #1 album ‘Culture’ which spawned their breakthrough international mega-hit ‘Bad and Boujee’ – their first US #1 single which sits at a staggering 700 million plays across YouTube and Spotify. The LP also features worldwide smashes ‘T-Shirt’ (270 million plays), ‘Slippery’ (80 million plays) and ‘Get Right Witcha’ (70 million plays), all with accompanying remarkable music videos which have become a staple of the Migos brand.

In the same period, Migos have become the must-have rap feature for the year’s biggest pop hits – with stand-out appearances on Calvin Harris’ ‘Slide’ (240 million Spotify streams) and Katy Perry’s ‘Bon Appétit’ (200 million plays) alongside singles from the likes of Sean Paul and Lil Yachty.

Simultaneously, Quavo, who makes up one-third of Migos, has himself emerged as one of the world’s most exciting rap stars in his own right with features on DJ Khaled’s worldwide triumph ‘I’m the One’ alongside Justin Bieber, Chance the Rapper and Lil Wayne (500 million plays), Post Malone’s massive ‘Congratulations’ (440 million plays) and Travis Scott’s platinum single ‘Pick Up the Phone’ alongside Young Thug (180 million plays).

The three Migos members are close relatives – Takeoff is Quavo’s nephew and Offset is Quavo’s cousin – who first appeared in public consciousness back in 2013 through their modern rap classic ‘Versace’. The single generated so much heat for the emerging group that Drake jumped on the official remix and Migos had officially arrived. In the following years, the trio continued to build a huge cult following an incredibly prolific series of mixtapes and their 2015 debut album ‘Yung Rich Nation’.

Over half a decade into their career and the current undisputed biggest rap group on the planet, the hype surrounding Migos’ first ever foray to our shores is sure to be at fever pitch. Get your Versace ready. Versace, Versace, Versace!