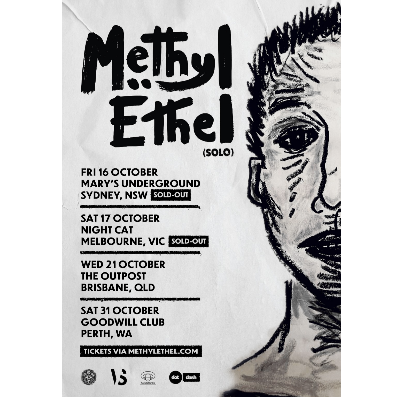 Here’s a read on Hurts To Laugh. It’s an EP by Western Australia’s Methyl Ethel,
recorded within the same sessions as 2019’s Triage. It marks the ongoing output of producer and multi-instrumentalist Jake Webb’s restless mind. Time and again he’s proven that while there’s no distinction between music and art, psychologically speaking there is a difference between feeling and emotion. One is a conscious response to a set of circumstances, the other is the unconscious conditions of our very being that only occasionally surfaces through feelings. Hurts To Laugh excavates this ambiguous site, implied by its very title. You can laugh so hard it hurts—pure joy. Or laugh despite the pain—despair. These paradoxes run throughout the EP, as well as everything that came before.

There’s the muted, knocking tom of “Charm Offensive” on this sixth Methyl Ethel release since 2013. Its 25-second false start of only a vocal and rhythm section opens in a distressed hiccough. The lyrics are repeated but indecipherable. A sentence starts but doesn’t end before a melodic organ carries the music into a dream pop ebb. The title is equally as inviting as it is antagonistic. An oxymoron. An alluring assault.

Lead single “Majestic AF” stumbles into its bubbling oscillator and analogue polyrhythms, while a kick-free drum beat marches right into an atonal synth melody supporting Webb’s equally idiosyncratic falsetto. Visual artist Loribelle Spirovski’s impasto paint strokes on the gestural side profile of a head on the EP cover resounds throughout the music it holds. The figure’s one detailed eye looks out from a flurry of vivid colour. He returns his gaze to his audience and dares them to guess what he’s thinking.

Sydney-based artist Spirovski is the same person whose work features on last year’s Triage—Webb’s third and last album in a trilogy of obliquely expressed relationship drama, starting with 2015’s Oh Inhuman Spectacle. That was a full-length debut with the eerie art rock aesthetic of Connan Mockasin, by a band with a similarly silly name. The jangly echoes of tracks like “Shadowboxing” and gold certified “Twilight Driving” resonated with the blown-out vibe of sun-soaked film photography, recorded across the bedrooms of Perth and produced by Webb himself. This muddled metaphor of sound and image is a deliberate one, because for Methyl Ethel, the two come hand-in-hand.

The artwork for 2015’s Oh Inhuman Spectacle; a found image titled ‘carnations in the modern manner.’ An almost abstract still life sculpture represented in flattened space. 2017’s Everything is Forgotten followed with artist Holly Fewson's female figure looking into a mirror with no reflection. That album, with its platinum-selling single ‘Ubu’—oddly reminiscent of a kind of rock-based Hot Chip-era synth pop—represented a cleaner, clearer sound worked on with Arctic Monkeys and Foals producer James Ford.

Methyl Ethel is a project that’s the brainchild of a single mind—writer, performer and producer Webb—while also being a live band of five members. It makes music that draws from myriad influences and a history of new wave and indie rock, while sounding like its own thing entirely. Both familiar and alien, intimate and aloof, you never quite know what you’re in for, but the trip is bound to be enchanting.