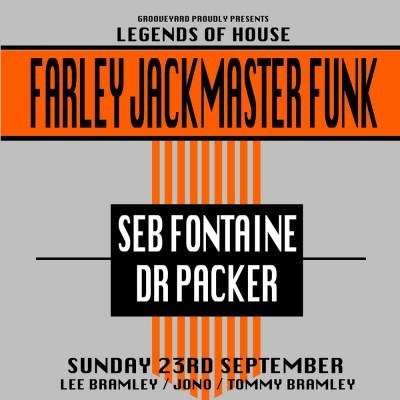 In true Groove Yard Style, we are very proud to bring to you the continuation of our Bespoke Parties in one of Perth's best venues! As usual this is going to be another epic event, in one of Perth's most best venues with top drawer production you have come to expect from our parties.

SO COME PARTAAY WITH THE EVER GROWING GROOVE YARD FAMILY, WITH OUR BIGGEST LINE UP YET !!!!! OLD SKOOL HOUSE, CLASSICS, ANTHEMS and all things GROOVY!!!!!

WE ARE TALKING PROPER PARTY MUSIC FOR PEEPS THAT KNOW !!!

THE PLAYERS LANDING IN PERTH FOR THE SEPTEMBER LONG WEEKEND:

WE ARE VERY PROUD TO PRESENT:  THE KING OF HOUSE,  ** FARLEY JACK MASTER FUNK **

Chicago’s Farley Jackmaster Funk is one of the original house music pioneers and is often referred to as The King Of House. The DJ turned

artist, producer, songwriter, director, TV presenter and radio host was the first artist to bring house music to UK shores as far back as 1986. He also made his mark on the UK charts and Top Of The Pops giving house music its biggest hit with the massive and

AND IT DOESN'T STOP THERE

Seb Fontaine is one of the most recognized DJs on the international club scene.Through his high profile and long-standing residencies, radio shows and compilation CDs, Seb has been at the forefront of the scene for many years and continue to showcase his electronic house grooves at high-profile gigs around the world.

Inbox us now: https://www.facebook.com/GrooveYardPromotions/  to reserve your tickets online only, or for any questions, call the number - 0433 284 490