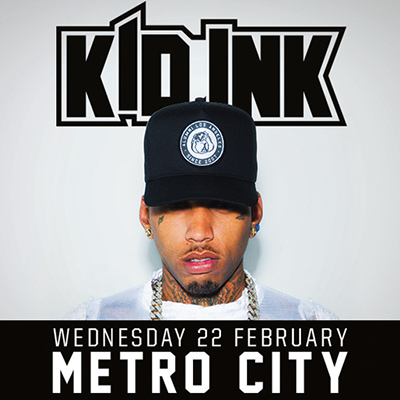 There’s absolutely nobody quite like the tattooed-from-head-to-toe impresario. Cruising past all boundaries, KID INK seamlessly slips from an irresistible hook into an impeccable verse, effortlessly bobbing and weaving between the club and the streets. His full-length debut, My Own Lane, invited audiences from various genres into his world.

Garnering a hugely positive reputation as a live performer and producer in the States - it's Australia's turn to get a dose of what this talented artist has to offer.

Guests at all shows are DONELL LEWIS and KENNYON BROWN.

Telstra Thanks is bringing an exciting 48-hour pre-sale just for Telstra customers from 10am Wednesday, November 9 until 10am Friday, November 11. For more information on how to purchase, visit: telstra.com/music.

KID INK officially started twisting the game up when he dropped his 2012 independent album, Up & Away, smashing iTunes records by debuting in the Top 5 of the Hip-Hop Albums chart prior to release. “Show Me” [featuring Chris Brown] introduced the world to the album. Fast forward a few years and KID INK has collaborated with Pusha T, Wale and French Montana, Usher and Tinashe to name a few.

Grinding as a producer since the age of 16, KID INK uncovered this creative highway by perfecting a personal style behind the board first. His production collaborations include everybody from Sean “Diddy” Combs, Sean Kingston, Nipsey Hu$$le and more. That experience in the studio set the stage for him to become the versatile and vibrant force he is today.