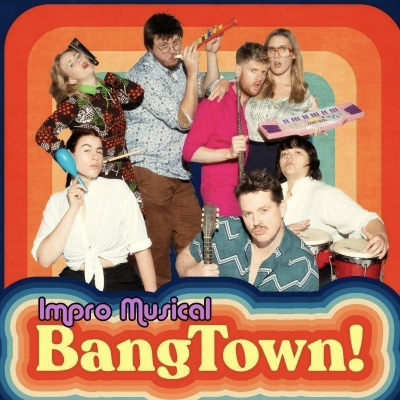 BangTown! is high octane, high octave improvised comedy, which means every note, lyric, and scene will be made up entirely from your suggestions.

BangTown! starts with fast and furious games, and finishes with a one night only improvised musical spectacular. Featuring ARIA, Martin Sims and FRINGE WORLD award winning comedians along with a red-hot three piece band of acclaimed musos from Perth’s musical theatre and indie music scenes. This crew’s dulcet tones will soothe your soul, and split your sides. Performed within the beautiful Rechabite’s Hall, BangTown! blends the dizzying heights of Hamilton with the spontaneous hilarity of improvised comedy.

It’s Broadway Spectacular meets ‘Whose Line Is It Anyway?’

Get your butts to BangTown! because the laughs ain't stopping soon.

Companion Cards
We accept companion cards in lieu of a ticket with any valid ticket purchased.
Please purchase a ticket for yourself, and your companion/carer will not require a ticket upon showing their companion card at time of entry.

Please note: A one-off Service Fee of $2.20 per transaction applies