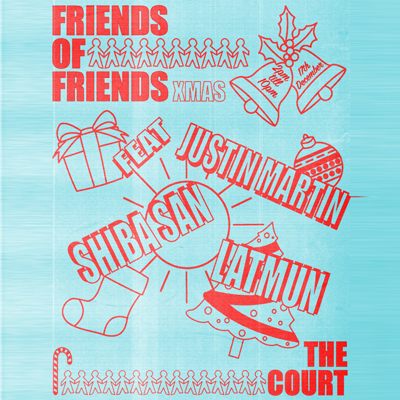 Mysterious French DJ and producer Shiba San’s deep connection with music, specifically hip hop, is well known. It forms his infectious, ghetto leaning deep house for labels like the influential San Fran label 'Dirtybird' and Amine Edge & DANCE’s hotter than hot House outlet 'Cuff'. Fusing classic analogue sounds with current technology, his rock-solid productions make for a truly personal sound. As a DJ he brings supreme dexterity and a deep selection of sounds from every inch of the spectrum.

Both Shiba San’s ‘Me & My Doggs’ EP on Sleazy G, and his remix of ‘Bad Boy’, hit the Top 10 on Beatport soon after release. The follow-up single ‘Okay’ on Claude von Stroke’s Dirtybird caused havoc on the dancefloors even before it was officially released, it went to #1 on Beatport and sent his bookings through the roof. May this stellar DJ’s bombastic beats, charismatic sounds and grooves never stop coming.

Justin initially pricked the ears of the electronic music community in 2003 with his first record ‘The Sad Piano’ on Ben Watt’s Buzzin’ Fly label. Everyone in the electronic music food chain got involved, from the A list DJs like Derrick Carter and Pete Tong that were playing the track, to the international music press that were raving about it. It even translated to the German underground, with Poker Flat licensing it for Steve Bug’s ‘Bugnology’ compilation. Like someone that goes bowling for the first time and gets five strikes and a turkey, Justin couldn’t really have hoped for a better entrance.

Demand for Justin’s skills behind the decks has skyrocketed with his bookings schedule constantly crammed to capacity. With bookings confirmed everywhere from Piknic Electronik (Montreal), to Exit Festival (Belgrade) to Panorama Bar (Berlin), Justin’s diary is reading like the dreams of a professional raver. Stateside he continues to be a regular fixture at the dirtybird events in San Francisco and beyond.

2016 was career defining for Latmun, with all 3 EP's breaking into the top 10 on the Beatport Tech House releases. This started off with his 'Def' EP on VIVa, which received support from scene heavyweights like Skream, Claptone, Claude Vonstroke, Mathias Tanzmann, Steve Lawler and many more, it still continues to soundtrack the biggest festival stages today. The Dance & Bop EP on Wow! Recordings had similar success and carrying on the momentum through to his most recent offering via Leftwing & Kody's Lost Records. 'Cosmic', the titular track shot all the way up to number 5 in the top 100 tracks chart, showing he earnt being named one of the stand-out artists of 2016. The most exciting project came about when Green Velvet asked him to remix his seminal classic - Flash - alongside the likes of Eats Everything and Oliver $. Considering the relatively short time he's been in the limelight, he's already made a lasting impression.

Showing consistency, 2017 went straight into full throttle with the Everybody’s Dancin’ EP on Green Velvets Relief Records securing the number 1 spot on Beatport. Making sure people knew there was more to come, Latmun then released the appropriately named ‘Groove Tool’ on Lee Foss’s repopulate mars, and is now following up with a debut EP on the coveted Hot Creations titled ‘Footsteps’ to close of 2017. Already gaining support from Jamie Jones, Carl Cox and other scene heavy weights, its sure to be another defining EP for the artist. Coupled with an intense worldwide touring schedule, and an armoury of releases waiting to be unleashed on the most exciting labels in the scene… 2018 is set to be the best yet.