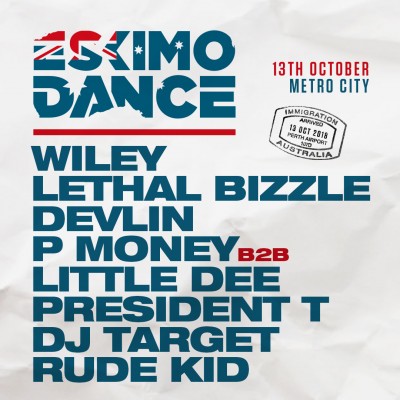 Sat 13 October | 09:00 PM
Metro City Concert Club
ATTENTION: This event has been cancelled, please see below a message from the event organiser. All ticket holders will be AUTOMATICALLY refunded in full, and refunds should appear back in your accounts within 3-5 working days.

‘The Perth promoter, Boomtick, has been advised by the touring agent the entire Eskimo Dance Australia/NZ tour has been cancelled. We thank you for your support in purchasing a ticket to the show and hope you get to enjoy some UK Grime very soon.’

For any queries please email support@megatix.com.au

Vastly considered the biggest event in the history of UK underground culture, Eskimo Dance was founded in 2002 during the upsurge of this new sound in the UK: grime. The event shaped the careers of some of the biggest names to emerge from the genre – Wiley, Dizzee Rascal, Kano, Tinie Tempah, Lethal Bizzle, Skepta, Stormzy and more.

Following a 6-year hiatus, it was time for Grime royalty to bring the event series back to life. The expansion of the scene over the years has seen some of the genre’s early talent go on to achieve national success. The rise of UK Grime and Rap became a global trend; colossal superstars P Diddy, Kanye West and Drake have co-signed the sound and continue to keep their eyes peeled on the main stars.

The legendary event returned in 2012, selling out regional tours consecutively along with collaborating with festivals including Bestival and Splash. Having conquered the tours and selling out venues across the country as well as competing in the infamous Red Bull Culture Clash, Eskimo Dance secured its spot as the #1 live experience of the genre – an accolade cemented in 2016 when Eskimo Dance sold out Wembley Arena with a legendary star-studded show that has gone down in the history of UK music.