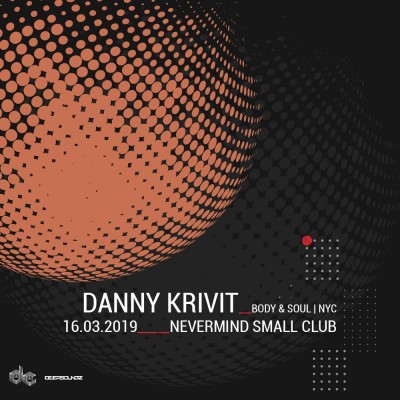 With a career that spans over the last 45 years, it's safe to say that Danny Krivit is, and has been, one of the most respected names in the underground music scene. The native New Yorker was surrounded by jazz and disco from a very early age, with his mother being an accomplished jazz singer and his father owning one of the city's popular night spots, The Ninth Circle, a club that would provide Danny with his first, of many, residences across The Big Apple.

As the popularity and demand for Danny's eclectic DJ sets increased, so did the amount of residences that came his way, with notable venues like the Roxy, Area, The Ice Factory and the legendary Studio 54, all getting his musical touch on a weekly basis.

The beginning of the 80's saw Krivit begin his studio work, with the likes of  soul super stars, James Brown and Gloria Gaynor, sending him trax to produce and edit....it was the start of  something colossal, and would see Danny release over 300 records to date. With dance music dominating the world from the early 90's, Danny inherited his father's club, as well as launching the now globally recognised club night, Body & Soul, with fellow musos, Francois Kevorkian and Joe Claussel.

The critically acclaimed night has allowed them to host Body & Soul parties in Brazil, London, Amsterdam, Miami and Japan, seeing them packed out with loyal followers and fans of the
vibe and style of music played at these events.

Danny's sets are filled with soundscapes that always boast this maestro's musical diversity, from rare disco and soulful vocals, complimenting deep tribal rhythms, along with the classic New York house sound, maintaining a vibe that has full focus on those on the dance floor.

This is a rare opportunity to witness a true master of his craft, within the perfect surroundings of the Nevermind Courtyard!

With it being such a special musical occasion, along with it being St Paddy's Day Weekend, we are gonna make a night of it, kicking things off from 6pm with a sterling lot of local support

Pre-sale tickets are available through Megatix - FIRST RELEASE AVAILABLE NOW - $25
Looking forward to partying with you all!