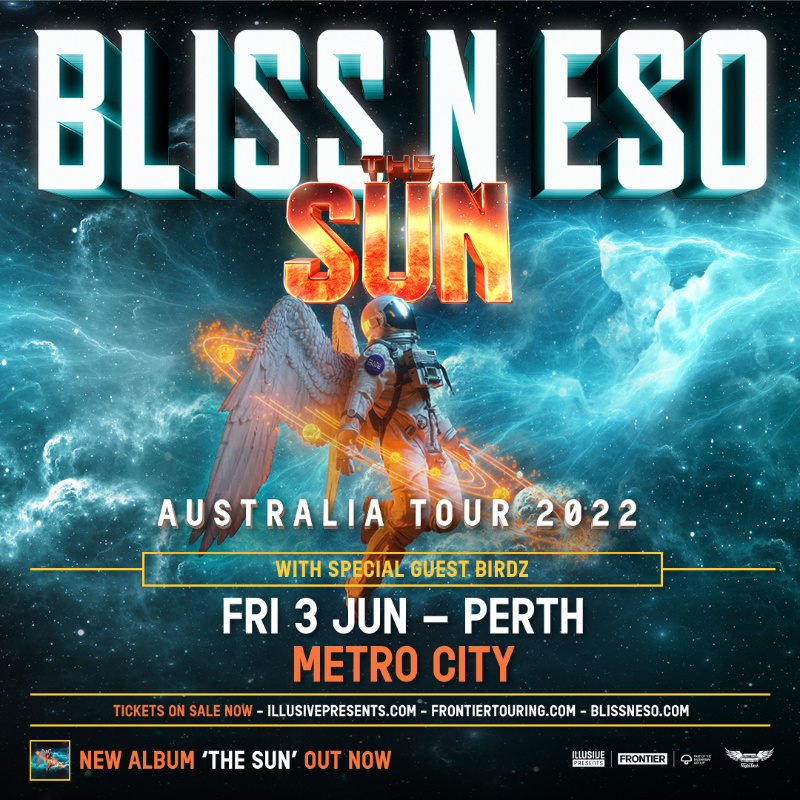 Illusive Presents and Frontier Touring are excited to announce a 29-date metro and regional Australian tour for one of the country’s finest hip hop acts, Bliss n Eso. In what is a truly national tour, the three-time ARIA-award winning group will take their electric energy and unmatchable flow to audiences in every Australian state and territory throughout January to April 2022.

Due to commence in September but unfortunately with current COVID-19 restrictions and border closures across Australia, the 2021 ‘Send It Tour’ will be cancelled and all tickets transferred across to the 2022 ‘The Sun Tour’ dates. Ticket holders will be contacted directly by ticketing agencies and fans are urged to #keepyourtickets.

The group will be touring in support of their polychromatic seventh studio album The Sun, out tomorrow via Flight Deck/Mushroom. Bliss n Eso have long juxtaposed light and dark, blissful and melancholy, and strong and vulnerable. Nonetheless, The Sun finds hope in somber experiences, heightening the album’s sense of release. As a group that has grown up through their music over many years, The Sun initiates a new cycle and provides solace in this age of disquiet, thematising contemplation, healing and fortitude.

Our first taste of The Sun has come in the form of singles ‘Good People (feat. Kasey Chambers)’ which made it’s live debut on this year’s Music From The Home Front concert, ‘Lighthouse (feat. Jake Isaac)’, ‘So Happy (feat. SonReal)’,  ‘Send It’ and more recently ‘On One feat. Dizzee Rascal & Kings’.

The band are disappointed that the Send It Tour is unable to go ahead as scheduled but are psyched to be returning with live shows in 2022 with their newest music from The Sun:

‘We have been busy working away on this new album for some time now. Being able to perform these new songs live on stage with you beautiful people in the crowd is the ultimate reward. we’ve got so many new bangers on this album that we can’t wait to take for a spin for the first time with you guys.  Those new tracks combined with all our classics is gonna be one hell of a ride.  We’re gonna tear the roof off and send it to the sun!’

With 3 x ARIA #1 albums to their name, more than half a billion all-time streams and more than 400,000 albums sold to date, this will be the Sydney hip hop heavyweights first major headline shows since 2017’s national ‘Off The Grid’ tour which was highly praised by critics and fans alike.

“Coupled with their lyrical creativity and verbal dexterity, they are formidable with a positive and uplifting message.” - Adelaide Now

“Bliss n Eso have this amazing variety to their music and whether it’s rapping or a little more classical in their vocals, their voices and musical talents resonates perfectly with music fanatics. So the audience were drawn into the music with their hands in the air, it was quite an electrifying… albeit sweaty experience.” - Impulse Gamer

Renowned for their captivating live performances and boisterous energy – don't miss out on tickets to see Australia’s finest, Bliss n Eso perform nationally for the first time in over four years, next January - April 2022.