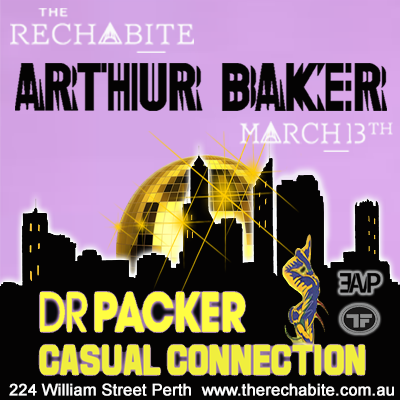 There aren’t too many people on this planet who have inspired the musical lives of so many than that of Arthur Baker.

There was a time when Arthur’s works would have been playing in every house & every car in the Western world & beyond. You wouldn’t find a radio station that wasn’t playing one of his songs.

Arthur Baker didn’t just inspire a musical movement with his single ‘Planet Rock’ - he was the pioneer.

The song ‘Planet Rock’ was released in 1982 and became popular, eventually earning a Gold record certification in the United States, It was only later that this new style of music was labelled 'Electro'. So revolutionary was this music even the rappers in the Soul Sonic Force had to develop a style he called "mc popping", which involved rapping off time. So pioneering was this track several musicians and groups noted how the track influenced them including Run-DMC, 2 Live Crew, A Guy Called Gerald & Fatboy Slim.

Before 1982 came to a close Arthur produced the single 'Walking on sunshine' which hit number 1 in the US.

This opened the doors as mega-stars such as Diana Ross, Bruce Springsteen, Cyndi Lauper, Bob Dylan, Neneh Cherry & the Pet Shop Boys to name a few. All wanted the Arthur Baker ‘Midas touch’ added to their work. Whether it was Arthur’s unique skill set in producing or remixing he has been responsible for some of the biggest musical tracks of all time.

Arthur was also responsible for signing exciting new bands such as ‘New Edition’, and whilst working as a producer he started to co-write songs for ‘New Order’ whom he has been working alongside for over 37 years.

More recently Arthur’s musical leanings have gravitated towards the sounds of Nu Disco and it wasn’t long before he fell in love with the work of Dr Packer. A mutual respect & open invitation to work and play has brought these two heavy weights together for one night only.

Perth has been gifted with a modern - day musical hero who we know as Dr Packer.

When you see giants of the world music industry make a massive detour just to experience the Dr playing in his home town, it puts into perspective just how lucky Perth is to have Dr Packer on its doorstep.

We all know the phenomenal calibre of Dr Packer, so let’s join together and embrace this gigantic union of music and show the world just how proud we are of OUR ‘Dr Packer’.

Lukasz aka Casual Connection has his very own unique style & vibe. Taking time out from his hectic schedule to ensure this unique event has that extra special topping in the only way he knows how. Get your disco shoes ready as Casual Connection not only has the flare, but he also has an arsenal of his own tracks which he has held close and also releases on many respected labels plus his own imprint M2MR.

The past two years have seen Causal Connection headlining gig’s all over Australia and beyond. Casual Connection cements this event as the pride of Perth.

For this special event we have taken the backdrop of this event to the next level. This newly opened venue in the heart of Perth has sat neglected for the past 60 years. Now with a cool $4 million spent on transforming it into a multi-level multi-function playground of pleasure. The Rechabite can boost facility’s including,

Our event will be hosted in the amazing ‘The Rechabite Hall’. With its double balcony winding around 300° of the event. Finding the right view point to see your hero’s isn’t going to be a problem.

**The Rechabite is a cashless venue**

Get down early as pre’s on the roof is the only way to start your night. You just may see Arthur, Casual Connection and the Dr for a friendly chat before the show begins.

This is going to be a monumental celebration of sound and the envy of so many.

Something tells me these guys have been working behind the scenes and Perth is going to get not only world exclusives but a magical journey of sound like no other.

THIS EVENT IS NOT BEING REPEATED ANYWHERE ELSE IN THE WORLD!!

PERTH - THIS SHOW IS JUST FOR YOU!

'Twisted Fusion Events, when music is more than passion'