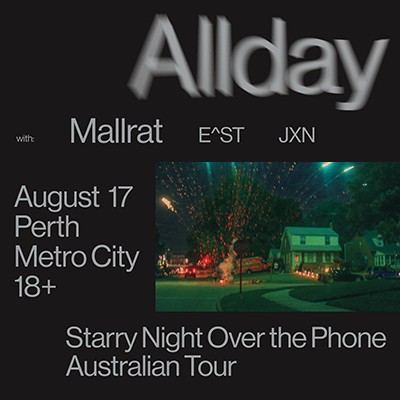 Renowned for making tender hit songs from his hybrid of hip hop, rap and pop, and then laying it all out on stage, today Allday announces a mammoth national Starry Night Over The Phone album tour set for August. Joining in for all tour dates are great friend and collaborator Mallrat, singer-songwriter E^STand musician-on-the-rise JXN.

The national dates will follow on from his anticipated return to the Splendour in the Grass stage where he will bring a rollcall of friends to help illuminate his upcoming third album. Hugely anticipated by fans and media alike, the album name has already been tattooed on one of his dedicated fans.

The tour announce comes alongside the release of new track ‘Lungs’. A harder moment than the previous two tracks released ‘Wonder Drug’ and‘Protection’, ‘Lungs’ sits deep in the groove, with every lyric delivered over a rolling melody displaying the relaxed delivery that Allday is known for. It’s a song that you can hear trickling out of cars as they roll through the streets.

It’s been a busy few years for the Adelaide-raised, now LA-based artist, his debut album Startup Cult came in at #3 on the ARIA Charts and it’s follow up Speeding landed a #6 debut plus an Air Award nomination. He has 3 Gold ARIA certifications for his singles ‘You Always Know the DJ’ and ‘In Motion’ ft. Japanese Wallpaper, and debut EP ‘Loners Are Cool’, and has accumulated over 80 million streams to date. A collaboration with long-time friend Mallrat on her hugely successful single ‘UFO’ has racked up over 14 million streams, and came in at #70 in the triple j Hottest 100 of 2018.

From smashing his sets on festival stages including Splendour in the Grass, Falls Festival, Groovin the Moo and This That, to selling out his massive headline tour dates around the country Allday has cemented himself as one of Australia’s most interesting young songwriters and in demand performers.