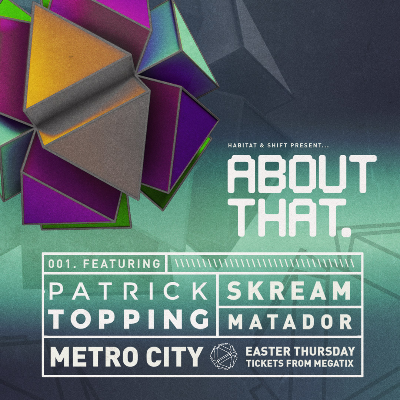 Spread over 3 rooms including ABOUT THAT Main Stage, SHIFT Terrace + HABITAT Rooftop.

SKREAM
As one of the UK’s best-loved selectors Skream has enjoyed the kind of consistency most DJs and producers can only dream of. His passion for collecting and playing music is unrelenting; disco, house, techno and everything in between… it runs deep into his core and he lives it every single day. Still only in his early thirties, Skream has achieved more in the last 15 years than most people do in a lifetime, yet his hunger and enthusiasm is akin to that of a man who is only just getting started.

MATADOR
As DJ Awards’ 2016 Electronic Live Performer, Matador is a revolutionary live artist with a shining reputation for versatility, whilst never compromising on quality. Accolades have been showered on the Dublin-born producer, from proud ambassador of the NEVE 5088 Console, and Richie Hawtin’s PLAYDifferently MODEL1 mixer, his tenure as an ENTER resident at their worldwide events, to his consistent spot in RA’s Live Artist poll, bringing him rapid worldwide acclaim and a devoted worldwide fan base of clubbers and peers alike. Still thirsty for new worlds to conquer, Matador, aka Gavin Lynch, recently took on a new role as label boss for his RUKUS imprint.👉